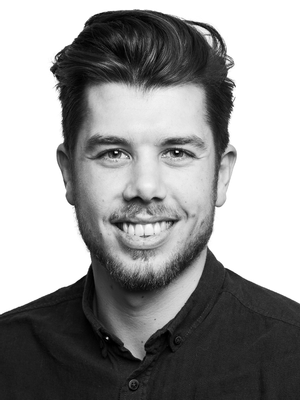 I guess my way into developing took a long detour through graphic design. I’ve always wanted things I use a lot to look and feel the way I prefer, and since I spent a lot of time in front of my computer in the teenage years I started to re-create the interfaces in games I was playing with Photoshop and some XML, adding new icons and visual styles to Windows XP or fill up my whole desktop with statistics and weather reports from Rainmeter.

That interest of solving graphical problems in my own life eventually led me to studies in graphic design and marketing where I soon realized I wanted to solve graphical problems for others. Among all the different methods for doing that, I found that UX-, UI-design and coding were the most fun parts, and also the parts that felt most ”me”.

Since my graduation, I’ve been working as ”the tech guy” at a small company, primarily running and re-building their e-commerce website, but also doing graphics, installing printers and you name it. The last year I finally started to digging deeper into the world of Javascript after a few years only focusing on HTML and CSS complemented by some basic jQuery knowledge. That’s where I am right now and where my focus is to become a better front-end developer, so I can keep on solving graphical problems.

When I’m not working I tend to be at the gym, on the football pitch or doing something fun with my girlfriend or friends (or both at the same time). Sometimes I just relax in the sofa, watching dev tutorials on Youtube or a nice football game.

Join Christian! We have vacancies in 🇸🇪Stockholm along with an enviable recruitment package.